Tony is a past president of the Mineralogical Society of Queensland and is also the current Honorary Curator of the Minerals Heritage Museum located within the Queensland Museum at Southbank in Brisbane.

In June 2021 Tony and Jude retired and sold the business to David and Janelle Bissett. David is another long-time collector and began dealing at shows in 2009. David and Janelle are local to Tony and Jude in Brisbane and are well known for their current business – Australian Rocks and Minerals. David was the purchaser of the Norman Donpon Estate Collection in 2018 and has an extensive knowledge of lapidary work as well as mineral collecting.

David and Janelle aim to follow on from Tony’s passion for minerals and collecting which means that you will always receive sound advice and quality specimens at fair prices. Please feel free to contact us if you have a special mineral requirement, a collection to be appraised or a special specimen for a present. We offer vouchers as presents for a special occasion.

Due to COVID19 the show circuit is still in disarray! Please revisit to see our latest information. If you are having withdrawal symptoms, why not visit our Mineral Sales Page!

Tony Forsyth is approved by the Federal Government to value Mineral specimens, gold specimens, gem crystals and meteorites
“Approved to value for the Australian Government’s Cultural Gifts Program”
If you would like a valuation please contact us and we will pass your details on to Tony.

In 2020 we purchased a fabulous old specimen to repatriate to Australia! Nickname “Brutus” by the buyer, it is a 43kg jackstraw specimen of cerussite from Broken Hill, NSW, Australia. 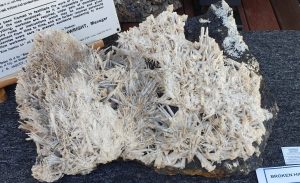 Mineral Store Australia is looking forward to attending shows when current restrictions end. Please give us a call or check Facebook to confirm that shows are on before travelling to a show during these uncertain times.

We are in the process of setting up a display which will be able to be visited by appointment at Birkdale on Brisbane’s Bayside. The below picture shows Tony’s well stocked room – we look forward to having our display up and running in the middle of 2022. In the meantime we will be adding to our online stock as well as providing a list of all of our stock. 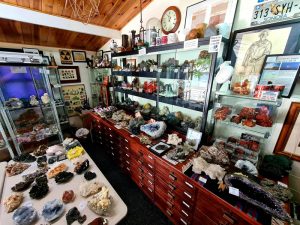 We travel extensively overseas to purchase the very best specimens to sell within Australia. Obviously due to COVID we haven’t travelled since February 2020, but hope to in 2023. In 2020 David attended the Tucson Arizona USA show. We have been busy using our extensive contacts built up over the years to ensure we continue to bring fresh stock to our customers.

In past years Tony and Jude have made multiple visits to the Munich Show and the St Marie aux Mines show in France.

The annual Mineral Store Australia calendar has been a keenly awaited release each year for the past 10 years – adorning walls well beyond the calendar year.

We have sold out of the 2022 Calendars and look forward to selling the 2023 version which should be available from September.

We now have an online store here on this website

Please check often to see what new material is added.

In October 2017 we obtained a large quantity of the rare mineral, crocoite, mined in the early 1990s at the famous Adelaide Mine, Dundas, Tasmania by the late Frank Mihajilowitz. This 33cm specimen was our latest delivery! 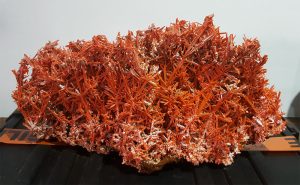 We recommend you check our Facebook page to confirm our attendance at a show.

There are lots of other shows we would like to attend but in these uncertain times both clubs and independent show organisers are reluctant to plan too far ahead. We will add more shows when they become available.

Where shows are marked “to be confirmed” these are shows we usually attend but have not received final confirmation of dates.

Please Note: In addition to purchasing mineral collections we also purchase lapidary material. We do not purchase cut gemstones.

We stock back issues of the Mineralogical Record as well as the Australian Journal of Mineralogy!

We have over 600 new and used copies of this great mineral resource available for purchase. Please check the stock list for price (AU$) and availability. Correct as at 04/2021
(Discounts may apply for multiple buys – please ask) 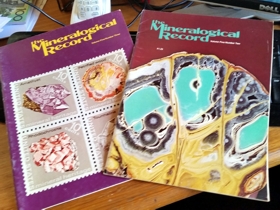